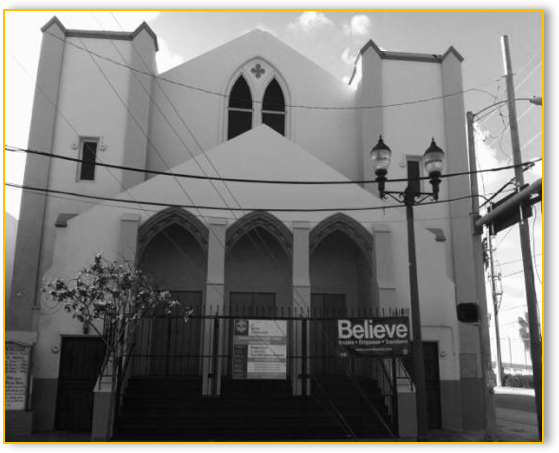 It was August, 1898. Miami was but a village when four pioneer families met and formed the Ebenezer Methodist Church. The organizers were: Rev. Davis (first name not known), John Page, his wife Sara, and daughter Janie; J. M. Dingle, his wife Sallie, daughter Lenora and six other small children; Charlie Taylor, his wife Georgia and daughter Rubie. Ebenezer was first located at the southwest corner of northwest 9th Street and 3rd Avenue; and remained there until a larger facility was constructed on N.W. 11th Street and 3rd Avenue.

In June 1973, under the leadership of Rev. Dr. Aaron D. Hall, Sr., the membership moved to 2001 N. W. 35th Street. This move enabled three separate congregations to hold their services under one roof: The Allapattah Congregation, The Allapattah Hispanic Congregation and The Ebenezer Congregation. Rev. Hall remained the pastor for 33 years before retiring.

In July 2005, we celebrated the arrival of Rev. Dr. Joreatha McCall Capers, as the first female pastor of Ebenezer. Upon her arrival, the motto: "Stone of Help" was adopted. Ebenezer is, literally, a "stone of help" and serves to remind us of God's Holy Presence and Divine Love. Spiritually and theologically speaking, God continues to help us, especially in times of need. His past work assures us of future help to come. Ebenezer's stones remind us of the faithfulness of God in our tumults as we strive for balance between "in reach" and outreach. Ebenezer lives out the meaning of the name, "Stone of Help," with our many partners.

In 2010, our Church was blessed with an Assistant Pastor, the Rev. Purnell A. Moody and his wife, Caroline Moody. The Moody Family has moved to Cooper City. In 2011, the Florida Annual Conference, in accordance with EUMC's Hispanic cultural vision, appointed the Rev. Rodolfo Casasayas as Associate Pastor and his wife, Isabel Corona, to our Church to start a Hispanic Ministry. In February 2012, the South East District of the Florida Conference of the United Methodist Church granted the ministry funds to refurbish the EUMC Chapel to accommodate the Hispanic Ministry's worship. This Hispanic Ministry has grown to 55-plus regular members. In June 2015, Ebenezer was blessed with Sr. Pastor Carrill S. Munnings, Sr. and his wife Annjeanette Munnings. We will continue "Celebrating Our Heritage" by sharing our faith and fulfilling our mission as we celebrate 120 years of praising God!